So this is a manga I never thought I would like. I got the first volume of this manga for Christmas that just passed. I got it from my mom and I didn’t have the heart to say that she picked the wrong manga to buy me. I’m a pretty open person so I gave it a try. But I’m happy I know about this manga now. I’m not a huge fan of this style of fantasy and magical elements but with how the romance is structured so far. I am really enjoying it. The story and art is done by Kore Yamazaki. There are currently 3 volumes out in English with the 4th coming out April 12th.

The story starts off with Elias Ainsworth, the main male character at an Auction. He drop an outrageous amount of money for this girl. Later known as Chise Hatori, she is considered a sleigh beggy. Which I am still unsure what that means but from the context clues it sounds like they are humans who have the ability to see inhuman creatures such as fairies and have the ability to use magic. Chise Hatori is a 16 year old girl with no family and no reason to live. She doesn’t think very highly of herself and has nowhere to go. Which may be the reason why she is being auctioned off at an auction. From the color cover, she also has red hair, that’s a plus in my book!

This first volume, like any first volume, is setting the scenes for things to come. It gives you a glimpse into what is in store for the future and just what to expect from this beautifully drawn story. The pacing is rather slow but nice. It’s kind of like taking a walk in the forest, you already know roughly where you are going but the things you will see and experience are the reason you like the forest in first place.

I like the steady flow of characters as well. Not a lot of characters were introduced so far, maybe 5 all together. The best part is that they were introduced but not gone into detail. Which sounds bad but they hint that these characters will be reoccurring throughout this story. Another thing I am happy to see is that Elias actually has some experience in the field that he is in. He’s not some kid that is super over powered and wins all the time.I am also happy to see the how forgiving Elias is. He is so caring and compassionate. He is structured like a father with the wise knowledge of being in a profession for a great number of years. 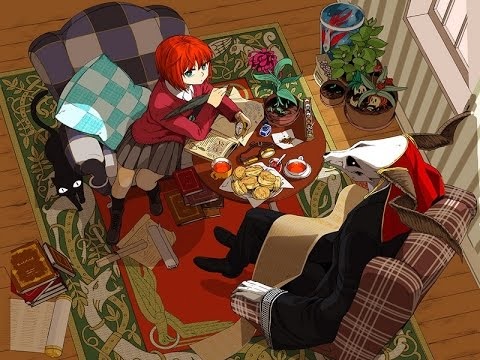 The only gripe I have about it so far is that there are times when the consistency of the art is compromised. There are times where panels look completely different from the others. You can say that this is for humor but this isn’t exactly a comedy centered manga, so why add that in? There are some parts where it is used and is funny but there more times when is feels almost forced or that the mangaka was just trying to save time or something.

I look forward to reading more, whenever that may be. Calming and satisfying are two words I would use to describe this manga when reading it. I felt content and happy while reading it. I hope it stays that way.

I hope you enjoyed! Have a wonderful day!